A year has passed since I joined the CORE network. My situation is different to that of others in the project, as I was the last ESR to join and therefore began my PhD many months after the other ESRs.

My first contact with CORE occurred in March 2017 while I was doing an internship in the SMS laboratory during the first year of my Master’s degree in France. During this experience, I met three of the first people to start as ESRs in CORE (Aliou, Lina and Ryusei). Throughout my interactions with them, as co-workers in the lab or at seminar presentations, I began to think that a project of this kind would be interesting for me to do in the future. The themes covered were similar to ones that I wanted to specialize in, and the assets of a Marie Skłodowska-Curie ITN seemed engaging and caught my attention. I then began to hope that a similar project, combining crystallisation and chirality, would become available for around the time when I would be looking for a PhD project: at this time, in theory after September 2018.

More than a year later, while doing my Master thesis in the same laboratory, I learned of a vacancy in the CORE ITN. I applied for it, and was accepted under the condition that I join the project as soon as possible (i.e. immediately after the validation of my Master’s degree). That is how, suddenly, on 17th July 2018, only three days after the viva for my Masters degree, I was on a plane heading to Glasgow to start my PhD at the University of Strathclyde.

It was tough to leave France during the summer time, especially after one full year of study without any breaks. However, it was for the sake of a unique career opportunity that I chose to trade sunny weather and barbecues for this grey region where they deep fry pizzas and speak a barely understandable English, otherwise known as Scotland.

Setting up at Strathclyde was actually pretty easy, personally as well as professionally, mainly because I was joining a project that had already begun. Indeed, everyone in the CORE project had one or two years of experience with the network, and they managed to guide me well with all my enquiries. I have been warmly welcomed and have integrated well, not just with those in the CORE network, but also with other colleagues from CMAC.

Nevertheless, starting my project in this environment was also challenging. Indeed, it was the first time in my academic career that I had to be completely autonomous and decide on my own what I would do for my thesis. CMAC is quite a crowded place for academic research, and they possess a lot of equipment and cater to different scientific specialities. If for many people being told that they can “choose whatever research topic they want and use any equipment, provided that everything achieved correlates with the CORE themes after three years” sounds like an ideal situation, for me it was more confusing. I was used to the French PhD system, where guidelines are defined under a common theme and linked to one another. Therefore, my first months were a bit of a blur as I struggled to find relevant themes or compounds to study. When I compared myself to the other, more experienced ESRs, some of whom by this point had written articles, worked set-ups, devised their own methods and generated tons of positive results, I felt frustrated.

Two months after I joined, I attended my first workshop and conference in Rouen, where I met every partner and ESR involved in the network. As with my experience at Strathclyde, the atmosphere was friendly and welcoming. I received a lot of advice and many motivational speeches that I really appreciated. But it was still frustrating, even more so during individual presentations, when everyone brought along detailed slideshows and results that initiated scientific debates while I just briefly presented myself and suggested some hypothetical topics I could work on. 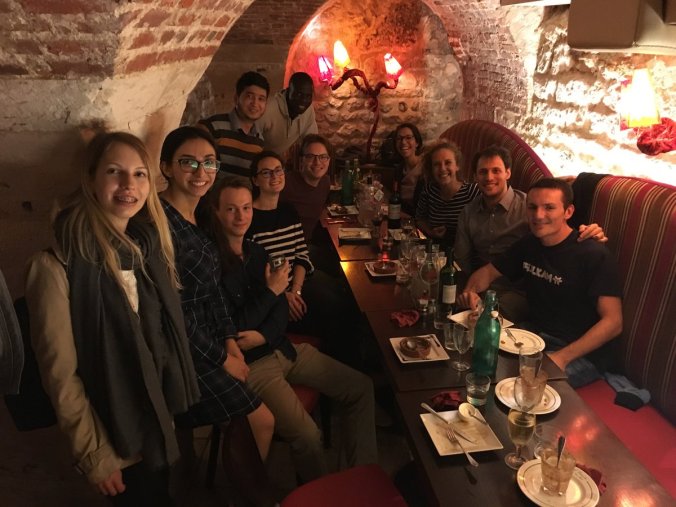 Maxime with the other ESRs relaxing after the CORE Workshop in Rouen, September 2018

Nonetheless, after a few months of doubt, I decided to trust myself and stick to what I had already worked on in my previous experiences. This is why I chose some research projects I already had knowledge of, but decided to try some new experimental techniques. I became inspired by what my colleagues were using as analytical techniques, and thought about how they could be used alternatively for my purpose. The fact that they had experience with them was also really helpful. Regular exchanges started, with each person bringing their own knowledge and background, leading even to the beginning of collaborations. I got my first positive results, gained more motivation and confidence as I carried on, and the machine started.

It has now been months I have been working with a guideline, having found objectives of what I want to achieve. My experiments are working well and I recently even had the opportunity to give a talk at the BACG50 conference in London where I presented my results and perspectives. I now know I will always see myself as behind in comparison to the ESRs who started two years before me, but it is actually an asset to be able to follow their path, listen to their advice and bring my knowledge to their already started projects by starting collaborations.

My experience in the CORE ITN is unique, as I will have less time in the project, shorter secondments, and I was not there to attend most of the events. What I will have learned by the end will therefore be different from what others have learned, socially as well as scientifically, because I am on my own more. However, it does not make it less enjoyable. I still appreciate every moment I have in the network and feel positive about the two years that remain.

Maxime Charpentier started his PhD in CORE project in July 2018 after obtaining a Masters Degree in Crystallization at the University of Rouen Normandy in France.

Maxime developed an interest in polymorphism of organic crystals and phase equilibria while working with SMS Laboratory in Rouen. Taking part in this activity in the laboratory also made him familiar with chirality and deracemization techniques. Crystallization is a subject area that fascinates him with applications like chiral separation and establishment of crystallization processes thanks to phase diagrams. Thanks to his formation, he specialized in solid-state chemistry and crystallization of organic molecules. Through his research experience in the SMS laboratory at Rouen, he developed skills in understanding of thermodynamic equilibria, chiral resolution and polymorphism. His project consists of developing a screening method to quickly and reliably determine the crystallization-based kinetic resolution possibilities of a new chiral compound.